[Inside] the Ford's New Play Series is Coming!

On the list of things I'm looking forward to this year: the New Play Series at [Inside] the Ford. Moving Arts was lucky enough to be part of this last year, for the world premiere of SONG OF EXTINCTION, along with Circle X (who produced BATTLE HYMN) and Ghost Road (who produced HOME SIEGE HOME).

This season includes:
Exciting new plays! I hope to see you at the theater.
Posted by EM Lewis at 2:39 PM No comments: 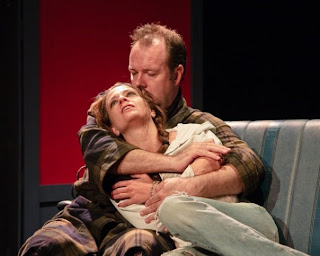 Rob Nagle and Maya Parrish in "Sing Me That Leonard Cohen Song Again," directed by Emilie Beck. "I wouldn’t come here unless I really needed it, Alex." 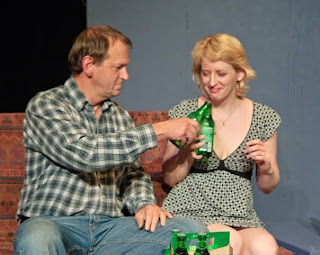 Richard Ruyle and Daria Balling in "Six Bottles of Heineken After the Silverado," directed by Julie Briggs. "I brought you home because you seemed kind. And age appropriate..." 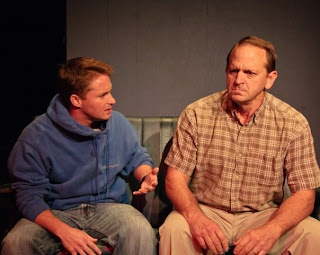 Casey Nelson and Richard Ruyle in "Reveille," directed by Julie Briggs. "I have to be there at 0700." 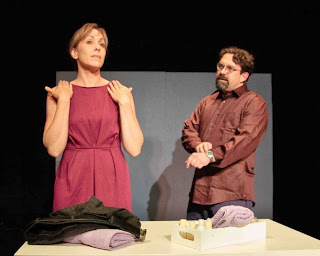 Laura Buckles and Jon Amirkhan in "This Isn't About Love," directed by Michael Shutt. "I always fall for women who are unassailable..."
(Photo to Come)
Michael Lorre, Helen Slayton-Hughes and Stephanie Erb in "Leonard's Voice," directed by Darin Anthony. "What are you doing out here, Leonard??" 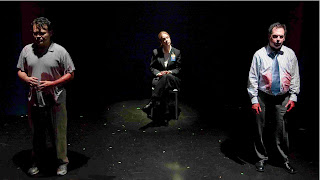 Peter James Smith, Stephanie Erb and Michael Shutt in "The Incident Report," directed by Lee Wochner. "I'm just trying to find the truth here."
Go here to see more lovely pictures of our production of FLIGHT -- all the shows -- taken by photographer Jay Lawton! Love my actors!! Love my directors! Love my stage manager and producer and designers! Everybody has worked so hard to make the show a success.

Go to www.movingarts.org for tickets and info to FLIGHT (my plays) and all the other fun and fabulous events in Moving Arts' One-Act Play Festival!


FLIGHT: AN EVENING OF SHORT PLAYS BY EM LEWIS

Sex, violence, love and Leonard Cohen songs... come check out the show!
Join us for a post-show wine and cheese reception with the playwright.
Presented at: Son of Semele Theater, 3301 Beverly Boulevard, Los Angeles, 90004
Posted by EM Lewis at 4:36 PM No comments:

Great reviews of HEADS in Denver!

HEADS has received glowing reviews in Denver -- both the play and the production. Check 'em out! And please send people to the show, if you know anyone who lives in the Denver area.

DENVER POST: "...a gripping fictional drama that raises important questions about our times."

NORTH DENVER TRIBUNE: "Heads shows us four people, each put in an unbearable situation, each reacting differently but appropriately for who they are. The four actors convincingly deliver the raw emotions of fear, anger, desperation, despair, and denial – but also something more – a deeper look at our own humanity."

DENVER EXAMINER: "...I am still haunted by the images that played out on the intimate Denver Victorian stage.... Heads is not easy to watch. The material is difficult, terrifying, and often heart wrenching – and this is the point. If you are looking for an evening of theatre that will get you thinking, that will leave an indelible impression long after the show has ended, and that will move you to tears – then this is for you.... In a season filled with bright musicals and silly comedies – Heads is a welcome, intelligent, and moving drama that is a must see."
Posted by EM Lewis at 1:53 PM No comments:

Email ThisBlogThis!Share to TwitterShare to FacebookShare to Pinterest
Labels: And Toto Too, Denver, Heads, reviews

More pictures from HEADS in Denver...

HEADS -- my four-character hostage drama, set in Iraq during the early years of the war -- continues to play in Denver through the end of the month. If you know anyone in Denver, send 'em over to the show! 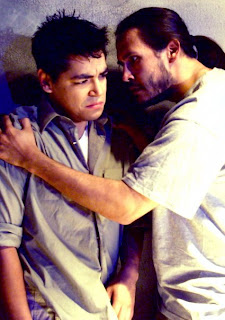 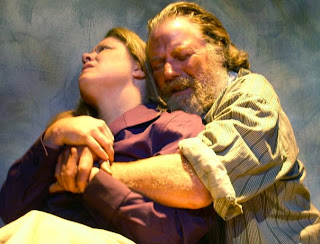 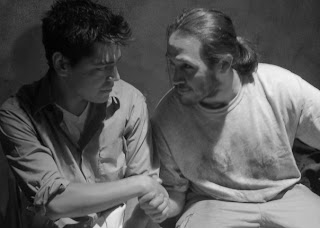 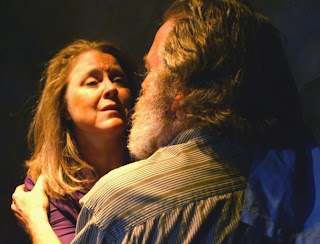 "Carry these words of yours with me, like stones..." 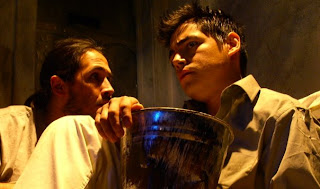 "What did they ask you?"

Email ThisBlogThis!Share to TwitterShare to FacebookShare to Pinterest
Labels: And Toto Too, Denver, Heads 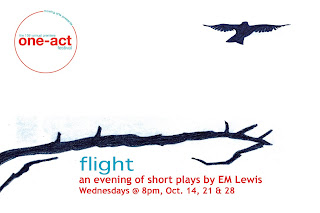 On Wednesday, October 14th, FLIGHT opens -- an evening of six of my short plays, directed and acted by a bunch of my favorite directors and actors. We've been having a lot of fun putting this together, led by top-notch producer Kim Glann. I hope Los Angeles folks can come check it out!
Putting together an evening of short plays by a single playwright is an interesting business. One hopes that there will be enough different styles and types of story and sorts of characters to make it a fun night for the audience... It's odd to see what crops up more than once -- love and violence, guilt and responsibility, fear and desire...

Info and tickets can be found at www.movingarts.org. Three nights only!! Come on out and see what we're up to. 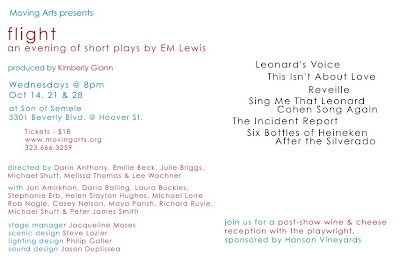