This has been a very different year.  Big things have happened.  (Publications.  Productions.  A fellowship.  A big move!)  Risks have been taken.  Fun has been had.  All in all, I feel like I can confidently say that the day has been seized!
I always feel like I need to be doing more.  But I'd like to take a moment, now, to celebrate what I did accomplish in 2010 -- and to thank everyone who helped to make this such a wonderful year.
Changes in 2010
Quit day job at USC in the spring, where I had worked for nine years as a "Documentation Specialist" -- doing user support, teaching training classes and writing documentation for their Student Information System.  I miss all my friends there!
Gave myself a summer vacation, and spent that time back on the farm, in Oregon.  Nice to spend some time with my family!  And in close proximity to Dad's vegetable garden...
Moved across the country, into the cutest little cottage in Princeton, New Jersey in the fall -- accepting a year-long writing fellowship at Princeton University.
Accomplishments in 2010
Winter
Began the year with a two-week long writing residency at Soapstone in Nehalem, Oregon.  What a beautiful place!  Set deep in the woods, overlooking a river.  A writing aerie, where I could work on my new play, "Magellanica: A New and Accurate Map of the World."
Completed one last round of Lee Wochner's "Words That Speak" playwriting workshop, where I began a new full-length play called "Magellanica."  (Lee has been a wonderful mentor, teacher and friend to me.  Thank you, Lee!)  This was my workhorse of a workshop for... so many years that I'm having trouble calculating.  I met a bunch of my very favorite playwrights there.  You know who you are.
Took two day-long playwriting workshops from Los Angeles playwright Aaron Henne.  Great stuff!  I got a good bit done on a rather elliptical new full-length called "The Year I Don't Remember."
Attended an early meeting of the new organization LAFPI -- the Los Angeles Female Playwrights Initiative.  Check it out!
Publications!  A scene from "Heads" was published in Smith & Kraus' "Best Men's Monologues and Scenes 2009" anthology.  My short play "The Edge of Ross Island" was published in the literary magazine "Eleven Eleven."  And best of all, "Song of Extinction" was published in Dramatics Magazine, and then by Samuel French.   Yay!
Spring
Had a reading of my ten-minute play "The Manuscript" in "Shorts & Briefs" -- a festival of short plays produced by the Los Angeles Women's Theater Project.
Directed a reading of Part I of my play Magellanica in the Dramatists Guild's "Friday Night Footlights," and then again at [Inside] the Ford, as part of the Words That Speak workshop readings.  Had an outstanding cast!  It is so amazing to hear something out loud for the first time.
Got my first passport.  Just in case I get the chance to go someplace wonderful and far away.
Had a reading of "Song of Extinction" at TimeLine Theater in Chicago.
Had a production of "Song of Extinction" at Ion Theater in San Diego, California.
Celebrated my fellowship (and said goodbye) with parties at my work (USC) and my theater company (Moving Arts).  I appreciate all the love and support so much!
Was talked about in a lovely article by my mentor, teacher and friend Lee Wochner.  Thank you, Lee!  You are the best.
Summer
Spent the summer back in Oregon, on the farm.
Had a production of "Song of Extinction" in the Edinburgh Fringe Festival in Scotland, produced by Rio Hondo College.
Wrote (and was paid for) an hour-long screenplay for a publishing company, creating a new story based on the work of one of their non-fiction writers.  It was an interesting challenge!
Was interviewed by Theresa May, University of Oregon theater professor and director of the Earth Matters on Stage Conference and Theater Festival.  ("Song of Extinction" was the winning play in the festival in 2008.)
Was interviewed by Theresa Dudeck, University of Oregon doctoral student and director of the workshop production of "Song of Extinction" in the Earth Matters on Stage Conference in 2008.
Took a trip up to Washington state and visited playwright pals Babs Lindsay (Seattle) and Stephanie Walker (San Juan Islands).  So much fun!
Produced "The Incident Report" in the Samuel French Off-Off-Broadway Short Play Festival.  We made the finals!  I was very proud of our intrepid Los Angeles crew:  director Darin Anthony, and actors Peter James Smith, Michael Shutt and Stephanie Erb.
Fall
Began 2010-2011 Hodder Fellowship in Playwriting at Princeton University in Princeton, New Jersey.
Did a reading with the other two Hodder Fellows -- Cynthia Cruz and ZZ Packer -- at Princeton University.  Actor Mark Nelson was kind enough to read with me, and we did two monologues (one from "Song of Extinction" and one from "Magellanica") and a scene from "Heads." 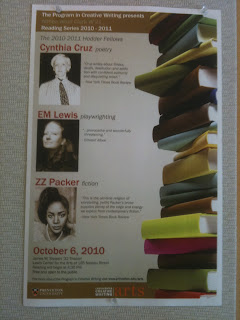 Had a reading of a scene from "Heads" in a fundraiser for friend Monica Bauer's upcoming production of "Balls:  The Testosterone Plays."
Sat in on a History of Science Seminar at Princeton University.

Acted as Host Playwright for the 2010 Ashland New Plays Festival in Ashland, Oregon -- welcoming the four winning playwrights, introducing the plays, conducting talk-backs and teaching a playwriting workshop.  It was a fabulous week!
Joined the Ashland New Plays Festival Advisory Board.
Had a reading of a new 10-minute play called "Apple Season" at Theatricum Botanicum in Topanga Canyon, California.  The theater asked a number of playwrights who had been lucky enough to have plays developed in their "Botanicum Seedlings" development program to write new short plays on the theme of "backyard fruit" that they could read on their lovely outdoor stage.
Participated in "Drunken Careening Writers" by reading short play "Seven Bottles of Heineken After the Silverado" with Aaron Simms.  Thanks for asking me to come out and play, Kathleen Warnock!
Joined a new playwriting workshop!
Had a reading of "Song of Extinction" at Briccolage Theater in Pittsburgh, Pennsylvania, followed by my first "Skyped" talk-back.  Technology, for the win!
Was asked to write an adaptation for Halcyon Theater's annual festival of plays by women playwrights in 2011, and began work on the project.  Keep an eye out for "Strong Voice" in Chicago this summer!
_________________________________
I'm very thankful for all the opportunities that have come my way this year -- and am looking forward to lots of work, fun and theater-going in 2011!
Posted by EM Lewis at 9:22 PM 2 comments:

No wonder I have no time to see movies anymore!  Here is a list of the theater I saw in 2010, along with a few music events, poetry events and talks.  I don't think I missed any, but...

Los Angeles, CA (and thereabouts)
·      Carousel at Reprise
·      Readings of plays from Lee Wochner's "Words That Speak" Playwriting Workshop at [Inside] the Ford
·      Exiles at the Hayworth
·      Sidhe at the Road, directed by Darin Anthony
·      Reading of Stephanie Walker's new play American Home at the Blank
·      bobrauschenbergamerica at [Inside] the Ford, produced by TheSpyAnts
·      Reading by poet Mary Oliver at Royce Hall.
·      A Wrinkle in Time at South Coast Repertory Theater
·      Stage Door at Open Fist
·      Reading of Rick Setlowe's new play at the Blank
·      Reading of Apogee +26 at Palisades Theater
·      Reading of my play Magellanica (Part I) in the Dramatists Guild's "Friday Night Footlights"
·      Men of Tortuga at Furious
·      Reading of Jami Brandli's play "Technicolor Life" at the Blank
·      Lacsivious Something at [Inside] the Ford, produced by Circle X
·      The Wake at the Kirk Douglas
·      Loyalties at Pacific Resident Theater
·      Alliance of Los Angeles Playwrights Party
·      Workshop production of Stranger Things at Bootleg, produced by Ghost Road
·      Getting Frankie Married... and Afterwards at Open Fist
·      Reading of my play Magellanica (Part I) at [Inside] the Ford, in Words That Speak workshop readings
·      The Twentieth Century Way at The Theater @ Boston Court
·      Workshop mates' readings at [Inside] the Ford, produced by Words That Speak
·      London's Scars at the Odyssey
·      South Pacific at the Ahmanson
Portland, OR and Ashland, OR
·      Reading of Gnit at the JAW Festival at Portland Center Stage
·      Hamlet at Oregon Shakespeare Festival
·      Readings of Ashland New Plays Festival winning plays: The Exceptionals, by Bob Clyman; Technicolor Life, by Jami Brandli; The Insidious Impact of Anton, by David Hilder; and The Gold Star in the Window by Harlene Goodrich
·      American Nights at Oregon Shakespeare Festival
New York and New Jersey
·      Oh, Deer at Princeton University
·      Band of Changes (music!) at BT Bistro
·      Aurelia's Oratorio at the McCarter
·      The Living Newspaper presents: Google Rising at Le Poisson Rouge
·      Lost Boy at Premiere Stages
·      Reading of The Mneumonist at Naked Angels, directed by Laura Savia
·      "The Wicked Women of Off-Broadway" talk -- Annie Baker, Lisa Kron, Theresa Rebeck and Sarah Ruhl
·      Paul Muldoon and Michael Wood (poet/critic) discussion at Labrinth Books
·      Love and Communication at Passage Theater in Trenton
·      Wings at Second Stage
·      That Hopey Changey Thing at the Public
·      An Iliad at the McCarter
·      EST event for playwrights
·      Anne Carson and S. Bynum (poet/fiction writer) at Princeton University
·      Edward Albee talk at NYPSI
·      La Bete on Broadway
·      Reading of Oedipus El Rey at the Lark
·      Princeton Symphony Orchestra (music)
·      Princeton University Triangle Show
·      Play Dead at the Players Theater
·      Middletown at the Vineyard
·      The Great Game at the Public
·      Reading of David Hilder's new play
·      Princeton University Orchestra's Shostakovich concert (music)
·      La Cage au Faux at the LongAcre
·      Next to Normal at the Booth Theater
Posted by EM Lewis at 6:26 PM No comments: