The Show is Open! The Reviews are In! 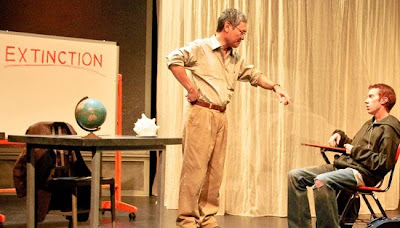 I've been too busy making theater to blog! But "Song of Extinction" is now up and running -- entering the 2nd weekend of a 6-week run at [Inside] the Ford. I went to the show last night, and was so proud of my actors. They are doing some beautiful work, and the show is finding its natural flow, I do believe! Technical elements are smoothing out, the actors are listening to each other and present with each other... I'm very pleased.

It's always scary, waiting for the reviews to come out. But we've received some lovely marks. Here are some highlights:

"After the actors had taken their bows and left the stage, the audience continued to sit in stunned silence. Nobody moved. Nobody spoke. It takes a pretty powerful play to generate that kind of response. A silence so profound as to be understood as an overwhelming tribute to an extraordinary production." -- Cynthia Citron, CurtainUp

"GO! E.M. Lewis’ haunting drama unfolds on a set bracketed by shadowboxes filled with butterflies, bells, maps, plants and pictures of Cambodian refugees... [her] smart and honest script is one small push from collective transcendence.... Aided by Stephanie Kerley Schwartz’s fine set, director Heidi Helen Davis finds beauty in death, staging it as a boat ride into the jungle with showers of butterflies — a gorgeous counterpoint to Phan’s pronouncement that “extinction is a very messy business.”" -- Amy Nicholson, LA Weekly

"...the relationship built between Max and Khim over the course of [Song of Extinction] is dynamic, charming and vulnerable —truly notable.... Director Davis takes the audience on an ethereal ride through death, resentment, acceptance and, finally, some peace. Each piece of this puzzle is beautifully crafted.... Lewis’s writing has given the director so much to work with..." -- Edie Gramean, SoCal.com

"...Song Of Extinction is an exquisitely poetic and deeply moving new play.... the unforgettable work of its two leads and the visually stunning direction of Heidi Helen Davis make Lewis’ follow-up to her previous Infinite Black Suitcase and Heads a winner..... Scenic designer Stephanie Kerley Schwartz and lighting designer Ian P Garrett do striking work, as does composer Geoffrey Pope.... exquisite writing and the gut-wrenching work of Kunitomi and Faught make Moving Arts’ production of Song Of Extinction one that will haunt you long after the lights have fallen on a father and his son." -- Steven Stanley, Stage Scene LA

"Lewis weaves a mesmerizing tale that gently plucks on the universal chords of the human condition, namely grief and acceptance and the wisdom it imparts from the experience that is both personal and shared. It is the journey then, brilliantly illuminated by director Heidi Helen Davis, and not the end, that strikes a resounding note as powerful and delicate as the beating effect of a butterfly’s wing." -- MR Hunter, StageHappenings.com

We were a pick in Flavorpill, and Greg Mellon did a lovely article about the play for the Long Beach Press Telegram. There was an article about me in this month's LA Stage Magazine, and an article about the War Plays Project (with pictures) in this month's Dramatist Magazine. The KUSC interview I did about the play with Brian Lauritzen is podcast on their website. LA City View (TV channel 35) has a new pilot series called "LA Live" that focuses on cultural events in the city, and will be coming to interview a few of us and see the show on Saturday night. Jackson Musker from KPCC's Off Ramp saw the play last night and liked it, and is going to be talking with several of us on Sunday about the play for his radio show.

A huge thank you to LUCY POLLAK, who is our publicist (thanks to the wonderful Winter Partnership with [Inside] the Ford, through the Los Angeles County Arts Commission). She has been beating all the bushes, getting the word out about our little play, and I appreciate *enormously* all of her work and dedication.

I chatted with Michael, the Ford's house manager last night, who complimented our Moving Arts producers for the wonderful job they're doing. They're organized, on time, and professional. Everything at the theater looks beautiful -- the lobby decoration, the food presentation, the programs. They have rounded up volunteers from Moving Arts company members and beyond to hand out programs and serve cookies and coffee and such.

So many people work so hard to make a play happen. Director (thank you, Heidi!), designers, producers, actors, tech folk, stage managers, publicists, volunteer assistants... And then people come. Hoping to be told a good story.

I hope people are going to come and fill our seats! I hope they'll like the story that we are telling together.

Tonight -- dinner with Emilie Beck, who is directing my upcoming reading of Catch at the Blank. Then we're seeing Will Eno's play Tragedy: A Tragedy at Son of Semele.

Tomorrow -- be at [Inside] the Ford at 6 to talk to LA Live people, then go over to WriteAct Rep for opening night of the Freeway Series, which includes my short play The Edge of Ross Island.

Sunday -- meet work folks for lunch, see Song at 3 with them and Jan from San Diego, then participate in the Talk-Back with composer Geoffrey Pope at 5. After that, talk with KPCC's Mr. Musker.

Whew! Will I do dishes this weekend? I don't think so...

Email ThisBlogThis!Share to TwitterShare to FacebookShare to Pinterest
Labels: Catch, reviews, Song of Extinction, The Edge of Ross Island 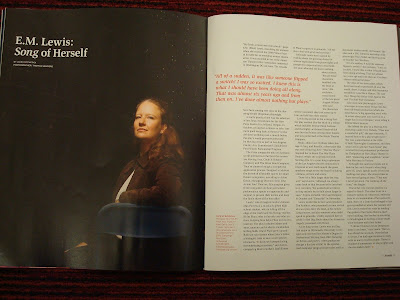 Two big pieces of publicity for Song of Extinction came out this week.

My radio interview on KUSC can be found here:

Also, there's an article about me in this month's LA Stage Magazine (picture above). Big thanks to Lee Melville, the editor, for letting me talk about my plays in his magazine!
Posted by EM Lewis at 2:39 PM 1 comment: 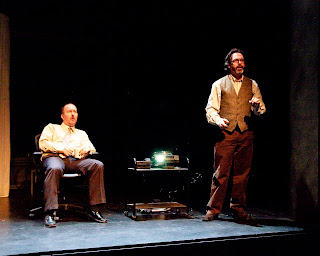 So -- previews for Song of Extinction begin tonight. What an emotional rollercoaster this process of producing a play is! I'm usually a somewhat emotionally stable person, but not lately.

I had lunch with my playwright/professor friend Dorinne Kondo today. She asked how I was feeling, and I told her that there were so many emotions in me about the production itself -- excitement, delight, worry, nervousness, excitement, vulnerability, responsibility, fear, delight again. And on top of that, I'm filled with all the stuff that caused me to write the play in the first place.

e in Song where Khim Phan talks about teaching.

Teaching is a strange thing, though. You learn in school to teach one subject, you are hired to teach one subject, the class is called by the name of that subject -- and you find, at some point, that you are teaching your self. Your whole self to them. My whole self to them, which includes biology but also funny stories about milking cows with my host family in Wisconsin, who were very nice Baptist people. And bad, expensive addiction to cigarettes, which I hope they do not learn. And Cambodia. Maybe I also teach them Cambodia. Because... I don’t know. Self-indulgence. Maybe. No. I do not talk about it all the time. I do not talk about it ever. But in this chapter on extinction, my country and history and family come up bitterly in my throat. And maybe I teach them about Cambodia without ever saying its name.

It's a little daunting.