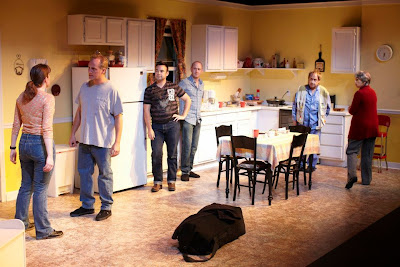 My play "Goodbye, Ruby Tuesday" has just opened in its world premiere at HotCity Theater in St. Louis.  I'm very proud of the play and the production.

Reviews are always tough, especially with new work, but we've received some lovely press.  Here are a few of the responses:

"...a funny and touching slice of life...  Director Bill Whitaker does nice work here, bringing this new play to life and gently guiding this exceptional cast.  The laughs and the tears are honest...  HotCity Theatre's production of 'Goodbye, Ruby Tuesday' is entertaining and moving theatre, and it continues through September 22, 2012 at the Kranzberg."  -Chris Gibson, Broadway World

"...the look and tenor of a domestic comedy layered on top of the emotional mysteries and unspoken threats of a Harold Pinter drama...  -Judith Newmark, St. Louis Post-Dispatch

"...an examination of one woman's desperation filtered through the prism of her life as it is, the way it was, and the hope... of finding what's missing...  a comedy, and a good one... remarkable cast..."  -Chuck Lavazzi, KDHX

The Wonderful Cast and Crew of "Goodbye, Ruby Tuesday" 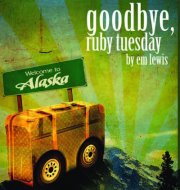 I spent a wonderful weekend out in St. Louis, helping my director Bill Whitaker, my fantastic cast, and all the nice folks at HotCity Theater celebrate opening weekend of the world premiere of my play "Goodbye, Ruby Tuesday."

"Goodbye, Ruby Tuesday" is about a young woman named Lynn who decides to leave her whole life behind, to become a commercial fisher in Alaska -- and about her family, who decides that they'll do absolutely anything to keep her from leaving.  It was a finalist for HotCity's Greenhouse Festival last year, and the company selected it for full production.

The play is just receiving its debut... but it was actually the first real play I ever wrote.  Before "Infinite Black Suitcase," and "Heads," and "Song of Extinction."  Like those plays, it's personal.  (Is it possible to write a full-length play without including a slice or two of your soul?)  Watching it play out on the stage was like stepping back into a turning point in my own life.  It's not a true story or anything.  But... I might have entertained notions of flight at one point myself.  And Alaska is a beautiful place for people who are running away from everything to imagine themselves going.

In the end, my character went one way; I went another.  I stayed; she goes.  It's hard to watch the play without wondering if everything might not have turned out differently if...

But I don't get to step back in time and change things.  Just peek in the window, remember, laugh a little, cry a little, and appreciate the talented people -- actors, designers, director, producers, stage manager -- who have worked so hard to bring this play to life.

"Lend Me a Mentor" heads to the Catskills

Last month, one of my most-produced ten-minute plays, "Lend Me a Mentor," was produced at the Open Eye Theater up in the Catskills as part of their "Summer Shortcuts" program.  The play is about a young writer who stalks her favorite curmudgeonly old novelist at a book signing, and tries to talk him into being her mentor.  It's been done in Los Angeles, featuring the delightful duo of America Young and Tom Boyle, directed by Julie Briggs.  It's been done in San Diego, and in China, and in a handful of other places.  Glad to add upstate New York to the list! 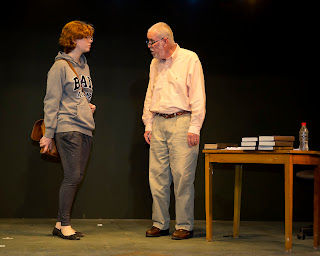 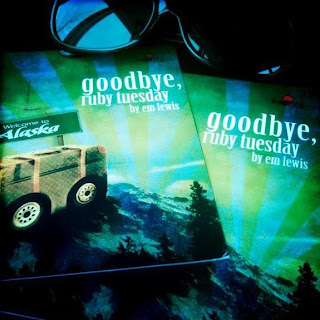 Tonight was opening night of the world premiere of my play "Goodbye, Ruby Tuesday" at HotCity Theater in St. Louis.  My director, Bill Whitaker, did a beautiful job -- shepherding this little play of mine up onto it's very first stage, listening to the play, listening to me, figuring out how to make it all happen.  The cast is fantastic!  And all of this has been after a wonderful experience workshopping and developing the play in HotCity's Greenhouse Festival in the fall, where I had the chance to work with director Annamaria Pilleggi and dramaturg Liz Engleman.

A big thank you to artistic director Marty Stanberry, and everybody at HotCity, for producing my play. This little play means a lot to me, and I'm so glad to be here with you to see it come to life.  Congratulations on a beautiful opening night!