New Voices for the Theater in Richmond! 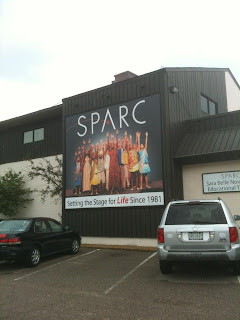 This has been such a great year for theater travel!  A few days ago, I took the train down to Richmond, Virginia, where I'm going to be spending the next two weeks as playwright-in-residence for the SPARC New Voices for the Stage program.  I'll be working with eight young dramatists whose plays were chosen from submissions throughout the state.  The first week will be lots of classroom work, and working on their plays.  During the second week, they begin working with their directors and actors.  The program culminates in staged readings of all the plays, and a big celebration of these new works with family and friends.

Our team is headed up by program director Laine Satterfield (who is an absolute delight), and supported by two wonderful resident assistants, and what seems like the whole city of Richmond.  There are dinners and outings planned with many board members and other program supporters while we're here, and I felt so warmly welcomed at the kick-off party down at the Firehouse Theater.

I'm delighted to be following in my friend Babs Lindsay's footsteps.  She was last year's PIR (or playwright-in-residence).  Big shoes to fill!  And I just found out that my friend and colleague Clarence Coo was a young playwright in this very program when he was in high school -- now he is winning national awards for his work.

I have so much love for writing and the theater -- it's a joy to be able to share that.  I'm looking forward to this being a wonderful couple of weeks.