As the winner of the Steinberg Award (for the best play premiering outside of New York City, as selected by the American Theater Critics Association), "Song of Extinction" will be honored alongside the ten best plays of the year in Limelight Editions' "Best Plays of 2008-2009" -- a collection of essays, statistics and information about the theater world -- in early 2010. For more information about the collection, visit their website!

www.bestplays.org
Posted by EM Lewis at 2:35 PM No comments:

I'm heading back to beautiful Ashland, Oregon at the end of October for another reading of "Song of Extinction," courtesy of the fabulous folks of the Ashland New Plays Festival. I'm so looking forward to returning there! I went last year with fellow 2008 ANPF winners Babs Lindsay, Tony Pasqualini and Steve Lyons, and loved this small town with a big theater festival (Oregon Shakespeare Festival) at it's heart.

The reading will feature a bunch of wonderful actors from the Oregon Shakespeare Festival. Returning actors from last year's reading include Cristofer Jean (as biology teacher Khim Phan), Liisa Ivary, Jeff King and Brad Whitmore. They'll be joined by Blaine Johnston (as young Max Forrestal) and Anil Margsahayam.
Posted by EM Lewis at 2:21 PM No comments:

I went to see Craig Wright's new play "The Unseen" at the Road on Friday. After writing my Iraq hostage play "Heads," I've been particularly curious to see how other playwrights delve into that particular kind of theatrical crucible. Hostage plays I've seen include:
(Am I missing any? Do let me know, so I can search them out.)

I've also been "collecting" Craig Wright plays (by seeing them), in part because some of my favorite local theater companies keep producing them, and producing them exceptionally well. So far, Craig Wright plays I've seen include:
I've liked all these plays to some degree, and respected all of them period. Craig Wright is exploring (in almost all of these, to some degree) the topic of faith. What do we believe? How do we believe it? What does what we believe mean in our real and sometimes terrible lives? How can you believe something you can't see or prove? How do we prove that something exists?

It's not my question, as a playwright. (I seem to be tending toward the existential in my quixotic playwrighterly quests.) But it's a good question.

Watching "The Unseen" reminded me strongly of reading CS Lewis (no relation) as a kid. I remember reading "The Screwtape Letters" over the course of one entire summer, when I was getting up at an ungodly hour to babysit while my mom worked on a neighbor's berry picker. Before that, I'd read "The Chronicles of Narnia" over and over again -- I think I read "The Last Battle" about fourteen times. (Really. I liked to read.)

I appreciate the struggle to make sense of faith that both these writers engage in. It's a difficult world to be a believer in.

It's a difficult world.

What do I believe in? 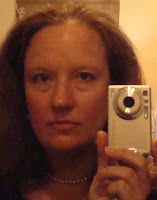 Playwright Adam Szymkowicz (who wrote "Nerve," "Food for Fish," "Incendiary" and the sublimely named "Deflowering Waldo" -- just to name the plays I've read or seen) interviewed me here as part of a series of playwright interviews he's doing on his blog. Check it out!