"Who's Afraid of Virginia Woolf?" moves from Chicago to DC...

A nice interview here with director Pam McKinnon and actor (and playwright) Tracy Letts about the production of Edward Albee's "Who's Afraid of Virginia Woolf?" that has moved from its Chicago home at Steppenwolf to DC's Arena Stage.

Arena is doing a big celebration of Mr. Albee's work right now, with multiple productions and readings of his work.  I'm thinking I might buy myself a ticket down there for my birthday -- because what a tremendous gift of a play his "Who's" is...
Posted by EM Lewis at 1:45 PM 2 comments:

"Song of Extinction" Opens at the Guthrie!!! 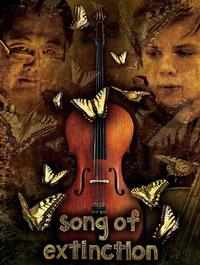 I've just returned from an amazing two days in Minneapolis, where I was celebrating opening weekend of "Song of Extinction" at the Guthrie with the fabulous folks at Theater Latte Da.  (All these beautiful photos are by Michal Daniel!)

The music, the set, the sound design and the art design were all fantastic.  And the reviews have been pretty darn fantastic, too...

All the right notes:  Theater Latte Da’s ‘Song of Extinction’ a touching triumph
“…filled with compassion for its characters and a delicate touch that makes [Song of Extinction] a very moving drama… To the credit of author Lewis and director Peter Rothstein, no point is belabored, no audience member bludgeoned with a message. For a work with so many layers, it’s nevertheless almost minimalist in structure, its dialogue convincingly realistic, its tone admirably restrained.”  — Rob Hubbard, Pioneer Press
Song of Extinction at the Dowling Studio: Examining the death of a family
“Making his professional debut, Piering gives a natural, nuanced performance as Max. His anger and pain are always near the surface and explode at the smallest provocation, but Piering never moves into melodrama. His focus fuels several of the show’s best moments, especially the final minutes, when the cello comes out of the case and Max finally is able to get beyond his anger and into his sorrow. The piece, composed by longtime Latte Da music director Denise Prosek, reflects that perfectly, while Piering plays it as Max would—full of anger and passion.”  — Ed Huyck, City Pages
‘Song’s’ refrain: Simple story, complex emotions
“…90 minutes of poignant worthiness … Rothstein’s second small jewel of the year… [He] shows us his articulate understanding of drama that gets inside the human psyche.”  — Graydon Royce, Star Tribune
Song of Extinction by Theater Latté Da performing on the Guthrie’s Dowling Stage
“This piece is intense, rich, affecting… [David] Mura lends the play understated resonance… Also first rate are John Middleton and Carla Noack as the Forrestals… Anyone raising a teen-ager knows how illogically volatile they can be and Dan Piering, as Max, captures this gorgeously.”  — John Olive, How Was The Show?
More information on this Theater Latte Da Production at the Guthrie Website.
Television interview with actors David Mura and Dan Piering on the KARE - Channel 11 website.
More about Theater Latte Da.
Posted by EM Lewis at 11:37 PM 1 comment:

Check out my monologue "Big" in Port Townsend, WA: March 7-8

I have a piece in "Here, There & Everywhere" -- a festival of monologues by women playwrights that celebrates International Women's Day -- happening at Key City Public Theater in Port Townsend, Washington on March 7-8, 2011.

Monologues by other American writers (“There”) are “Big” by EM Lewis, New Jersey, “The Hunter” by Gloria Calderon Kellett, Los Angeles, “The Last Reading of Charlotte Cushman” by Carolyn Gage, Maine, and “The People” by Vicki Caroline Cheatwood, Texas.

From the Writer's Desk...

Where do I work?  At a moderately messy desk in Princeton, New Jersey... but if you'd like a few more details about where I do what I do, check out this interview with the splendid Sara Israel, who is blogging for the Theater @ Boston Court in Pasadena, California about playwrights and their workspaces.