Some pictures from (and news about) "If I Did This"

The reading of "If I Did This" at Judson Church, produced by Flux Theater Ensemble, went very well! What a warm and friendly thing they've created in their "Food:Soul" series -- a potluck, followed by a reading of a new play.  I haven't known the Flux folks for very long, but I felt welcomed into their theater family on Friday night.

A thank you to Ken Glickfeld for the lovely pictures!  And a big thank you to my director and cast.  We had four rehearsals over two weeks, in which I was able to work with them closely, write new scenes and edit existing ones, and see what this new play is made of.  I'm so happy to be a playwright!  The work is such great fun.

Some happy news arrived in the mail today, regarding the play -- it is a semi-finalist for this year's Princess Grace Award!  And that was before the new edits...

"If I Did This" at Flux's Food:Soul in NYC

I finished the first draft of a new play a few months ago, just in time to work on it with my fantastic director friend David Hilder and a most wonderful cast at Passage Theater in Trenton, where I attend the Playwriting Lab.  Since then, I've been tinkering with it a bit, but haven't been sure, yet, what it's really made of.

I've been attending Flux Sundays at FTE for more than a year, now -- their Sunday afternoon theatrical "work-outs" with playwrights, directors and actors -- and enjoying the opportunity to see their fierce productions.  And I was very pleased when I received an e-mail from Matt Archambault at Flux, asking if I'd like to workshop that play I'd been bringing in pieces of over the last few months.  I leapt at the opportunity!  There's nothing like working with a great bunch of actors over a couple weeks of rehearsal to figure out how a play is working.  Actors and directors ask great questions as they're trying to figure out how to make a play work.

We had our first read-through on Monday, and will continue rehearsals next week.  The process will culminate in a potluck and staged reading of the play.  Big thanks to Matt, FTE Artistic Director Gus Schulenberg, and director Pete Boisvert for putting this whole thing together!

A Staged Reading of "If I Did This"
Written by EM Lewis
Directed by Pete Boisvert
Featuring: Matt Archambault, John Greenleaf, Marianne Miller, Stephen Conrad Moore and Jane Lincoln Taylor

Doors Open and Food is Served at 7:00pm
Staged Reading Starts at 8:00pm

Rehearsals begin for the World Premiere of "Goodbye, Ruby Tuesday" at HotCity Theater in St. Louis

I'm heading to St. Louis this weekend for the first read-through and first rehearsals of my play "Goodbye, Ruby Tuesday" at HotCity Theater in St. Louis.  The play was one of three finalists in HotCity's Greenhouse Festival in the fall, alongside plays by the talented Gino Dilorio and Christopher Wall.

I'm delighted that HotCity decided to produce the world premiere of "Goodbye, Ruby Tuesday."  And I'm so pleased that they're bringing me out this weekend to meet with the director and actors, do one last look at the script, and nudge this baby chick of a play out of the nest!

For more information on the world premiere of "Goodbye, Ruby Tuesday," visit the HotCity webpage! 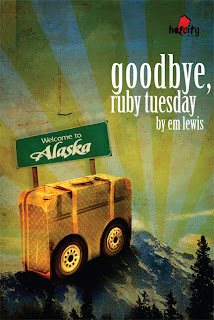 
What it's about:
In one hour, Lynn is going to climb onto a Greyhound bus, leaving her home, her husband, her job and her family behind to work on a commercial fishing boat in Alaska; her family has decided that they'll do anything to make her stay. "Goodbye, Ruby Tuesday" is a comedy about trying to explain why you have to go find yourself to people who don't want anything to change.

"The Incident Report" in Jersey Voices 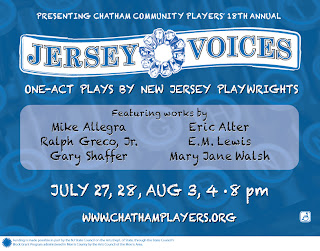 This summer is turning into the busiest time ever!  Up next is the five-character version of "The Incident Report" in Jersey Voices at Chatham Community Players.  I've been actively pursuing opportunities here in my new state of New Jersey, and am delighted to have had this short play picked up at an annual event that showcases Garden State playwrights.

Why the five-character version?  Well... an accident of the submitting process, actually!  "The Incident Report" is about an aviation safety investigator who is trying to determine what went wrong on a flight where things went very, very wrong -- and who's responsible.  It has gone through a variety of iterations, some that moved through time in various ways, some that had three characters and some that had five.  Ultimately, the version that was produced in an evening of my short plays at Moving Arts in Los Angeles, and subsequently made the finals of the Samuel French Off-Off-Broadway Short Play Festival in New York City, was the linear three character version.  When I submitted the play to Jersey Voices, though, through the magic of e-mail submission, I accidentally attached a different draft.

I gave the theater the other version when I realized my mistake, but they really liked the five character version, which brings the action that happened on the plane right up on stage in three bloody dimensions.  And I have to say, I"m excited!  How often do we have the chance to see different versions of the same play fully produced, to see what works best in each?  I'm looking forward to attending.  If you're in New Jersey, I hope you'll check it out!  More information and ticketing are available through the Chatham Community Players website. 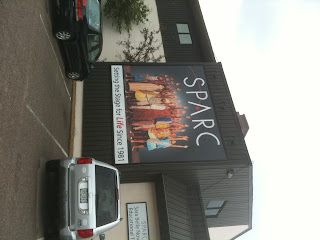 The last few weeks have been really, really amazing.  I've been teaching and mentoring young playwrights in the SPARC: New Voices for the Theater program in Richmond, Virginia.

Being playwright-in-residence at New Voices meant spending a week teaching the fundamentals of playwriting, and then moving to a more dramaturgical role in week two, as the eight winning playwrights were paired with directors and actors, and began rehearsals of their winning plays.  It all culminated with beautifully staged readings of the plays with friends, family and members of the community in attendance.
Having six hours a day, for five days in a row, to talk about how plays work was a great gift.  We had so much fun!  All eight of the student playwrights were smart, creative and game.  I tried to mix things up with group exercises, paired work, physical activities, writing prompts, and sharing work.  I used improv as a writing tool more than I ever have before to teach playwriting.  The kids really took to it, and I felt like it gave us a chance to try out some of the things we were talking about in class -- goals and objectives, obstacles and tactics, action and dialogue, negotiation over props, theater magic...  All the fun stuff!  It also reinforced something I believe strongly -- that plays are about action, not just two dimensional words on a page, but three dimensional human beings crashing into each other in beautiful and complicated ways in the living, breathing world of the stage.  We studied by day, and by night, they worked on rewriting their own one-act plays.

The Richmond theater community gave their hearts and their talent to this program, with some of the best directors and actors in town working tirelessly with these young writers -- letting them be the playwright in the rehearsal room for the very first time.  (What joy, seeing them see their plays come to life in hands of talented actors!)  The plays ranged from romantic comedies to tragedies, and from the deeply psychological to the absurd to the delightfully funny.

I truly hope that I have more opportunities to teach in the year ahead.  Teaching playwriting -- being able to share what I love so much with others -- was a great gift.  But it will be hard to beat the experience I had with New Voices.  It's an extraordinary program -- well organized and inspirationally led by Laine Satterfield.  And we had an extraordinary bunch of kids.