I feel lucky to have been asked again this year to be a mentor for the Blank Theater Company's Young Playwrights Festival. On Friday night, I schlepped over to the Stella Adler Theater in Hollywood to meet my playwright, Gabe Neustadt, and see the show. Despite the whole area being surreal (located one block over from Michael Jackson's star on the day after he died -- a madhouse!), I was so glad to be there!

Gabe is a 19-year old playwright from Florida who just graduated from high school, and is on his way to Harvard. A smart young man! And a good writer. His play is called "Who Is Morrie Rothline?" -- and it's an intriguing exploration of both madness and guilt. One of my favorite actors, Jeremy Gabriel, was in it. I worked with him in the original workshop production of "Infinite Black Suitcase" at Moving Arts, and in the Blank's production of "Heads." He's outstanding! So was Tom Lenk, who played the more than moderately unhinged titular character...

A great night of theater, and a great cause. Check it out next year! Support young playwrights! 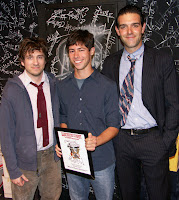 Playwright Gabriel Neustadt (Who Is Morrie Rothline?) with actors Tom Lenk and Jeremy Gabriel at the Young Playwrights Festival 2009!
Posted by EM Lewis at 3:40 PM No comments:

Heads in Chicago -- Pictures from the Alcyone Festival 2009 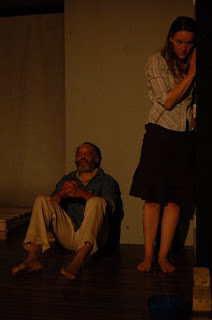 Pictures from the Chicago production of Heads -- in the Alcyone Festival 2009, produced by Halcyon Theater. This is Arch Harmon as Harold Wolfe and Kerry Cahill as Caroline Conway. 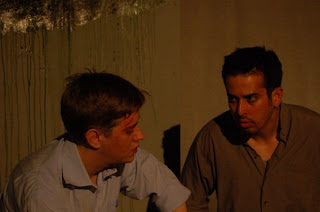 This is Patrick King as Michael Apres and Miguel Nunez as Jack Velazquez.
Posted by EM Lewis at 4:04 PM No comments:

The Car Plays ZOOM into Los Angeles this weekend... 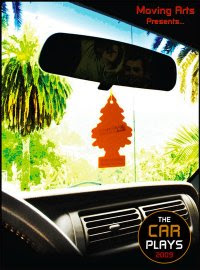 This is where I'm going to be this weekend. Hope to see you there, Los Angelenos! My play is called "Leonard's Voice." It's directed by Darin Anthony, and features Michael Lorre, Helen Slayton Hughes and Stephanie Erb.

If you don't know about The Car Plays... well, where have you been? (Just kidding!) The Car Plays are the most intimate of site specific theater -- short plays that are performed in cars, for an audience of two people at a time. You buy a ticket for one hour's worth of plays -- five all together -- and move from car to car to experience each one. There are multiple rows of cars, all with plays happening inside them. All the plays were written specifically for this event. It's pretty darn cool!

FROM THE PRESS RELEASE: The Car Plays, originally conceived by Paul Nicolai Stein, is a unique, theatrical event that puts both actors and audience INSIDE actual vehicles.

In Los Angeles, we constantly break up in cars, make up in cars, live, die and laugh in cars. Moving Arts explores these moments through a series of original ten-minute plays written by their Resident Artists and other local playwrights.

"This is the best thing that’s happened to cars since the invention of the wheel!” –Review Plays

Filming on the Chinese-language film "San Qiang Pai An Jing Qi" — which roughly translates as "The Stunning Case of the Three Gun Shots" — kicked off on June 9, Ping Xue, a publicist at Zhang's Beijing New Picture Film Co., told The Associated Press in a phone interview from Beijing."

I will definitely be seeing this one on the big screen. Check out the full story here. (Didn't know I liked Hong Kong flicks? What can I say. I'm eclectic...)

Check out "The Chimes" in NYC 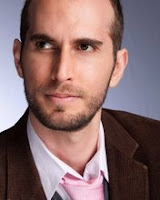 If you're searching about for something cool to do in New York City in July, check out "The Chimes" at SPF, written by Kevin Christopher Snipes. More info here.

"In The Chimes, Nicholas Ross returns to his boarding school still haunted by the decisions he made forty years ago. As the past overtakes the present, the play flashes back to four young friends drawn together by their knack for Shakespeare and torn apart by the onset of World War II."

I looked Kevin up after seeing a production of his wonderful short play "Party Lights" at the Secret Rose Theater in North Hollywood, on the same bill as me for their annual 10-minute play festival. It was just the kind of writing I like -- subtle, but strong, and roomy (by which I mean he gives the actors room to breathe in their roles).

I wish I was closer to New York, so I could see this presentation of "The Chimes." SPF is tough to get into, and I like this play a lot. The back and forth in time, people haunted by their past, literary banter... good stuff! Check it out, New Yorkers.
Posted by EM Lewis at 11:03 AM No comments:

Look here for playwright Adam Syzymkowicz' interview of playwright Malachy Walsh, whose play "Beyond the Owing" is headed to the Red Eye Theater in Minneapolis. I liked what he had to say, especially his advice for other playwrights.

My play is coming back to haunt me. Which is a good thing.

I started writing "Heads" around 2004, as near as I can remember. I ought to write these things down. The war in Iraq was well underway, and as Caroline Conway (my character) says, "Everything is 'quite all right,' but there are more bombings every day. Lots of bombings." Casualties were high on our side and much, much higher on the Iraqis'. Many of us felt conflicted (or downright angry) about the war, but enmired we were. It was happening, with or without our lefty-liberal blessing. We were there.

But of course, we weren't there. We were all the way back here. And trying to make sense of things. Trying to be angry at our government for starting a war we didn't believe in or agree with without being angry at the American soldiers who were being sent over there to fight it. Trying to keep from conflating terrorism and the Muslim faith. Reeling, still, from 9/11 and this (this?) response to it. Wondering what voice we had in a world where GW had been re-elected. Our country? Was it our country still?

Last Monday, I went to New York for a reading of "Heads" at Emerging Artists Theater. Sitting in rehearsals with the director and actors, listening to the reading, and then participating in an impromptu talk-back afterwards was a strange experience, like being visited by my own ghosts. I adore Jack and Michael. I am Harold and Caroline. My heart wrenched a bit. But it was lovely, too, hearing that the play has (perhaps... I hope...) human questions in it that remain, even as some of the war questions have been answered.

The play has certainly had an upswing in interest lately. Lawrence Harbison at Smith & Kraus will be publishing a scene from the play in one of his "Best Scenes" anthologies -- look for that at the end of the year. Halcyon Theater in Chicago has included the play in its 2009 Alcyone Festival -- six plays, written by women, on the subject of terrorism -- running through June and July. And a small theater in Denver, called "And Toto Too," will be producing the play in October -- a month-long run. I'm delighted that the play is finding these beautiful new homes, and can't wait to see what these nice folks in Chicago and Denver do with my play -- how they make it their own.

Everything is resonating with the play right now. I've been talking with all these people -- figuring out contracts, discussing travel plans, attending the New York reading rehearsals, e-mailing back and forth with directors and artistic directors and actors about the play and inviting people to the reading and shows. I have seen the artistic director, all four actors, the director and the set designer from the world premiere production at the Blank theater in the last week at a new play my director is directing at the Odyssey, at a Young Playwrights Festival kick-off party and at my New York reading after not seeing most of them for ages. My LA Michael came to my NY reading, and at one point I turned around and he was pow-wowing with the NY Michael -- odd seeing them together. My Chicago artistic director (Tony Adams) asked for and received information on how they created the moss-like substance in the boys' cell from my generous Los Angeles director (Darin Anthony) and set designer (Dan Jenkins). On Saturday, I'm meeting with a couple actors to do a table read of a sequel to "Heads" that I've been mucking about with that may or may not ever become a full-fledged play. I had this notion about a trilogy...

Anyway... I'm new to this. This resonance. It was so grand and amazing having someone do my play once, it felt greedy (necessary, but greedy) to ask for more from the world. But here it is. More has arrived, in a bushel basket.

The Chicago folks have their first performance of "Heads" on Saturday night. My thoughts will be with them. I can't wait to meet them all at some point during the run, when I fly out there! I hope they are enjoying working on my play.
Posted by EM Lewis at 3:08 PM No comments:

Email ThisBlogThis!Share to TwitterShare to FacebookShare to Pinterest
Labels: Alcyone Festival, And Toto Too, Emerging Artists Theater, Heads, Smith and Kraus, The Blank

Pictures of Song of Extinction from the EcoDrama Festival

Here are some pictures from the EcoDrama Festival's workshop production of "Song of Extinction." The play was directed by University of Oregon theater doctoral student Theresa Dudeck. She did a great job, and it was fascinating to see what she, her design team and her actors had done with my little play. These pictures were taken by Theresa's husband. 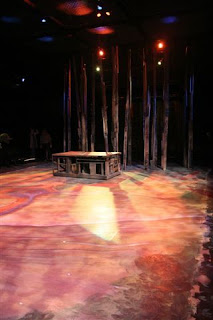 The set under the lights. The set needed to work for both my play, "Song of Extinction," and C. Denby Swanson's play "Atomic Farmgirl." Because the thrust of the conference was ecological issues (and because they're good, ecologically minded people), the designers chose to use only re-used materials for their set construction. I really liked what they did -- the "forest" of table legs and rescued two-by-fours, the rolling bed/boat from which sittables could be extricated, and the beautifully painted floor... (Bolivia, maybe Cambodia). 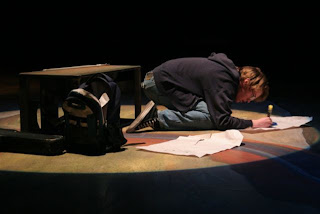 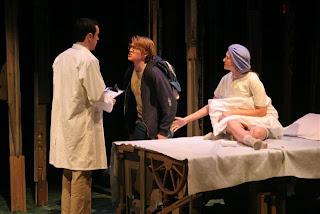 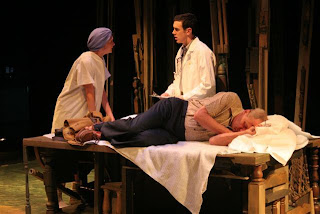 Max is missing, you're no help, and he is my husband. 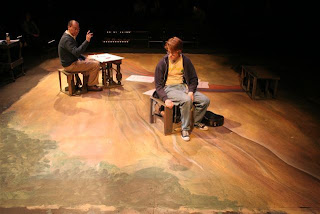 Max goes to talk to his biology teacher, Khim Phan. They discuss extinction... 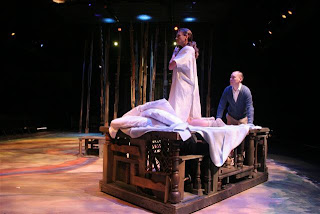 Lily is on her journey now. Khim helps all he can. This is a terrible thing to be an expert in.
Posted by EM Lewis at 3:39 PM No comments:

Email ThisBlogThis!Share to TwitterShare to FacebookShare to Pinterest
Labels: EcoDrama, Song of Extinction

Check out the Young Playwrights Festival (YPF), a wonderful annual festival produced by the Blank Theater, encouraging young people to write for the stage. I'm a mentor again this year, and delighted to be part of things!