Song of Extinction at Hostos College! 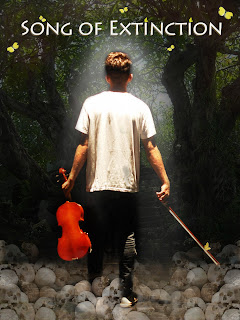 I'm very pleased that my play "Song of Extinction" is going to be performed on November 14th and 15th by Hostos Rep at CUNY Hostos College in the Bronx.  The play has also been named Book-of-the-Semester -- more than 900 students at Hostos will be reading and discussing the play.  I'll be attending the evening performance on November 15th and doing a talk-back, and also participating in some of the interdisciplinary events that are planned throughout the semester.  A big thank you to Professor Morales for directing this production, and to Professor Robert Cohen, who coordinates the Book of the Semester project.

Hostos Humanities Professor Ángel Morales, who earned an M.A. in Educational Theatre from New York University, has been the Artistic Director of the Hostos Repertory Theater (Hostos Rep) since 2007. Under his leadership, the Hostos Rep also produced Borinquen Vive en El Barrio by Tere Martínez, which played in the 2008 installment of TeatroStageFest. In 2010, the company staged the English/Spanish production of Virgilio Piñera’s Siempre se olvida algo (You Always Forget Something), for which they won four HOLA awards and two ACE awards.

In 2011, the Hostos Rep was one of only five university-based companies, as well as the only one from a community college, invited to participate in the northeast regional competition of the Kennedy Center’s American College Theater Festival. The troupe presented Peter Sinn Nachtrieb’s production of boom!, and cast member Abe Rasheed was a finalist in the festival’s individual category.

Morales said he is excited that Song of Extinction is coming to Hostos. “The fact that a play of this caliber is going to have its New York City premiere at Hostos, and that it could serve as an opportunity to integrate various academic disciplines, is exciting and a privilege.”

Morales added that Hostos students and faculty would be able to take advantage of the play’s diverse intellectual subject matter and participate in several post-performance discussions. Song of Extinction is also the fall selection for Hostos Community College’s “Book of the Semester” project. The “Book of the Semester” project is an interdisciplinary initiative to inspire students to read and develop critical thinking skills. With Song of Extinction, the themes that will be analyzed include literature, history, education, science, and music. 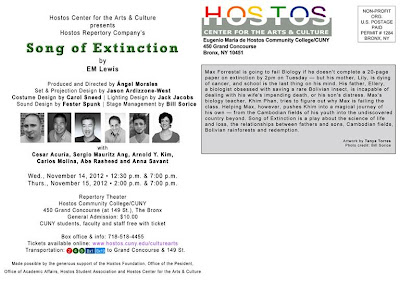 The family-friendly history play I was commissioned to write for Premiere Stages' Liberty Live initiative was supposed to be performed at the Liberty Hall Museum on the Kean University Campus November 1-4.  But the weather had other plans!  Hurricane Sandy hit New Jersey and New York with devastating force, shutting down schools, businesses, transportation lines and power.

The show has been postponed indefinitely.  We had begun rehearsals, but hadn't yet reached load-in or tech rehearsals.  We all hope that it will have a life, once the lights come back on!

For more information about the show:

KeanXchange: History Up Close and Personal 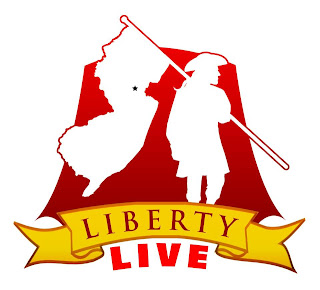 One-Acts by EM Lewis at high schools in Lansing, MI

Congratulations to Everett and Sexton High Schools in Lansing, Michigan, where director Jim Allen produced nine of my short plays with his student actors.


Hope you had fun with the plays!
Posted by EM Lewis at 8:15 PM No comments:

Congratulations to Colony High School in Ontario, CA for their production of "Infinite Black Suitcase!"

The 2012 Ashland New Plays Festival kicked off with a beautiful gala at the Art Museum on October 22, celebrating the festival's 20th anniversary.  It was a fantastic week of play readings and talk-backs, theater talks, and playwriting workshops.  I was so glad to return for my third year as Host Playwright! The week was hosted by dozens of volunteers, led by the festival's Artistic Director, Doug Rowe, and Board President Gray McKee. 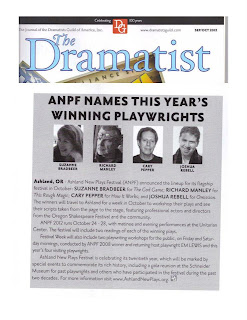 Three of this year's playwrights were from New York City, and one was from San Francisco.  We had a delightful time getting to know each other during our week in Ashland!  The directors and actors were fantastic.

Ashland audiences always provide the best talk-back conversations, and this year was no exception.  The playwrights had given us much to discuss, with plays on topics ranging from politics and religion and the implications of social media and technology to financial misdeeds and the perils of success in the art world.

I enjoyed teaching a three hour playwriting workshop on Friday with local writers.  On Saturday morning, Cary, Josh and Suzanne offered a second workshop, allowing local writers the opportunity to ask them questions about everything from the craft of writing plays to how to market your work.

Local Bed and Breakfasts hosted the playwrights, and other local businesses opened their doors to us as well, including local cafes that offered coffee and the official drinking establishment we attended each night, appropriately named "The Playwright."  I was also able to see several shows at the world-class Oregon Shakespeare Festival!  I cried at "Romeo and Juliet," and am still thinking about "Troilus & Cressida" and "Medea/MacBeth/Cinderella."

It's always so wonderful to see everyone who makes this festival happen each year.  Thanks for another great ANPF, my friends!