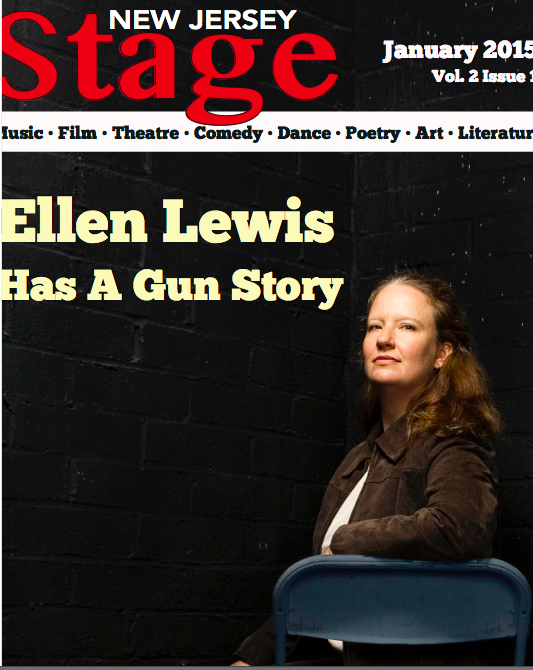 After an exciting world premiere production in Chicago over the summer and a sold out run of a second production in Los Angeles in the fall, THE GUN SHOW is having its third production in eight months right here in New Jersey.  This play -- which is about guns and gun control, and my own personal experiences with both -- is playing at Passage Theater in Trenton from January 22 - February 8.  It is directed by Damon Bonetti, and features Trent Blanton.  I will be there for all performances... so if you do come, please say hello!


Details and ticket information can be found here:  http://passagetheatre.org/gun-show/


And check out these three feature articles about the show.  (Beware of spoilers, though!  They got 'em.)
Feature article:  Finding Middle Ground
http://www.centraljersey.com/articles/2015/01/21/time_off/entertainment_news/doc54bf47412afd0238184058.txt 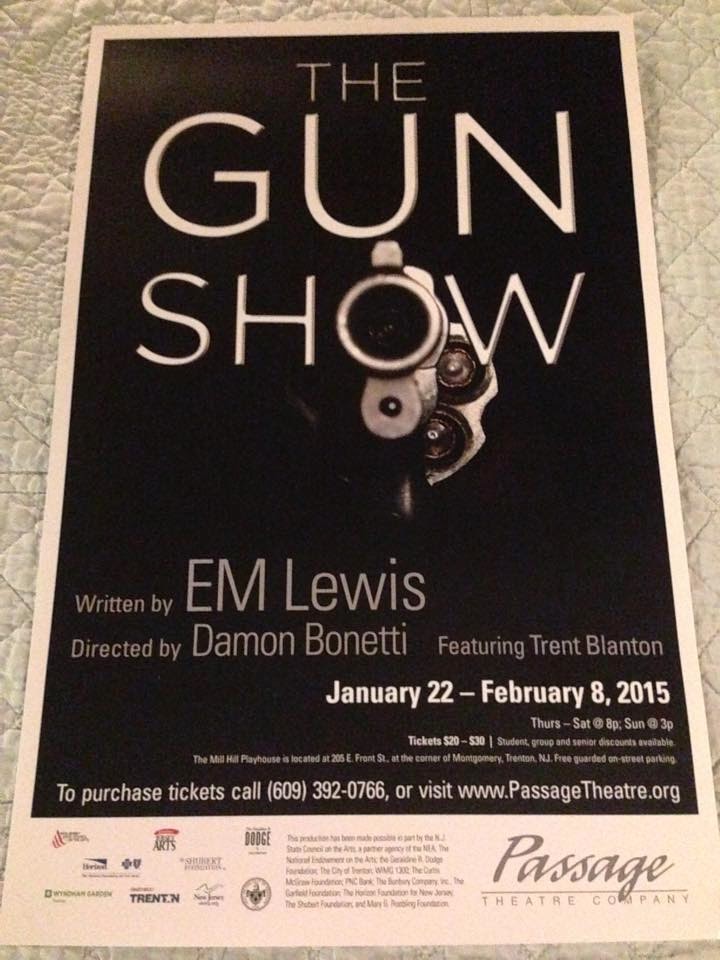 The Gun Show - Endings and Beginnings

I've never had a show close in one city and open in another on the same day.  But that's what's happening today.  "The Gun Show" is having its final performance at Moving Arts, in Los Angeles, this evening.  And it's opening night for the Passage Theater Production of "The Gun Show" in Trenton.

It couldn't be more appropriate, really.  Because this play is all about endings and beginnings.  Beginnings and endings.  I go back and forth on the order, in my head.  This play is a door, and... I think I get to decide which direction to go through it.


I started this play in the middle.  By which I mean Chicago.  But maybe I mean more kind of middle than just that.  (Everything is a metaphor today.)  It's a rather intimate and personal play, and when it premiered at 16th Street Theater, I was still, in many ways, figuring out what it wanted to be, and how to manifest it up on stage.  I was very lucky to have Kevin Fox dramaturging and directing and occasionally holding my hand and propping up his overwrought playwright (do they teach that in directing school?).  I was very lucky to have Juan Villa up on stage, telling my story with all of his skill and empathy and humor and charm.


When I went to Los Angeles, to work with director Darin Anthony, and actor Chuma Gault, and producer Cece Tio who were putting the play on stage at Moving Arts, I knew more about how the play worked.  But it is a city where some of the major action of "The Gun Show" took place.  It is a place where I lived for a long time -- first with my husband, then alone.  It is the place where I lost everything, and began again.  It is the place where I became a playwright.  It is a place where a lot of people know me, and it was difficult to tell people I know and love this story.  But I'm glad I did.  Thank you, Chuma, for bringing all your ferocity and grace to my gun show.


Some of the action of "The Gun Show" occurs in New Jersey and New York, too.  I lived here for three and a half years, and made strong and enduring friendships.  Passage Theater in Trenton premiered my play "True Story" last season, directed by Damon Bonetti, and it feels very right to now be working here, with Damon, on this play, which *is* a true story.  (Funny how that works.)  We've had two previews, and already it feels uncomfortably revealing to be sharing this story with people who I know and love.  (Why are strangers easier?  But they are.)  Edward Albee once said that theater should afflict the comfortable and comfort the afflicted.  I've always liked that.  Playwright Robert O'Hara once remarked that he was trying to create theater where everyone was welcome and no one was safe.  I like that, too.  And the playwright herself shouldn't be exempt from being welcome and afflicted and unsafe and comforted.  So it's very right to be doing this play here, and now.  I'm feeling all of those things.  I'm also feeling grateful for yet another wonderful actor who has taken up this story and made it his own.  Thank you, Trent, for the fearlessness and vulnerability and intelligence that you are bringing to "The Gun Show."

Here I am, standing in the doorway.

Light a match.  For light, not for burning.

Begin a conversation about this.

Choose the direction that is forward.

The new year is busy, busy, busy already!  It's so nice to be working. I have three shows up in January, and one in February, and I hope that you'll check them out if you are in the vicinity!

The Moving Arts production of The Gun Show has extended, so you have three more chances to see it!  Directed by Darin Anthony. Featuring Chuma Gault.  Produced by Cece Tio. Congratulations to the Los Angeles team! movingarts.org

I'm getting ready to spend a month on the east coast, where the Passage Theatre at the Mill Hill Playhouse production of The Gun Show in Trenton is going to be taking the stage. Directed by Damon Bonetti. Featuring Trent Blanton. Damon directed the world premiere of my play True Story at Passage in 2012, and I'm delighted to be working with him again, and with everyone at the playhouse! passagetheatre.org

If you're in Minnesota, you can check out the St. Louis Park High School production of Infinite Black Suitcase. This is a high school production. Support kids making theater!
https://www.facebook.com/slphstheatre

My play Heads -- a hostage drama set during the early years of the Iraq War, winner of the Primus Prize from the American Theater Critics Association -- is going up in New York City.  Tickets will be available soon, so stay tuned for more information!

*******************
I'm packing my parka for NJ/NY -- and hope to see some of you when I'm out there, which will be from January 14 through February 9 or 10.  I'll be down in Trenton for the most part, with my production of The Gun Show, but will definitely try to take the train into New York City for a few days as well, and maybe down to Philly and DC for a couple days, too.  After New Jersey, I'm going to be in Chicago (or thereabouts) for a little writing retreat for a week or so.  And then I go to Ellensburg, Washington for a few days, to be a playwriting respondent for the Kennedy Center American College Theater Festival, Region 7, and teach a playwriting workshop entitled "Writing Our Own History."  Back home to Oregon again after all that, I think!  Until the next thing comes along...

What a wonderful year it has been!
I wasn't sure what impact moving back to the farm in Oregon would have on my playwriting career.  But 2014 was full of new creative partnerships, lots and lots of writing, and a nice batch of productions.
It's been a year of transition in more ways than just location.  I premiered the smallest and most personal play I've ever written ("The Gun Show"), made huge strides in my biggest play (the Antarctic epic, "Magellanica"), and wrote my first opera ("The Resurrection Engine," with composer Evan Meier).
I feel like something is unlocking inside me right now, in some deep and fundamental way.  Writing "The Gun Show" (and being part of its production)... is letting me step out of a room I locked myself in quite a while ago.  It has been very hard.  There may have been an unseemly amount of crying involved in the eking out of those pages.  But I feel lighter now.  Like I've set down something very heavy.  And like I've stepped out of the darkness.
Perhaps this is part of what allowed me to move forward on "Magellanica" -- an epic ecological drama, set at a research station in Antarctica in 1985 -- which I've been researching and working on for quite a while now.  I went from having part one and a little bit of part two at the beginning of this year, to having four of the projected five parts of the play drafted.  A nine-week residency and workshop at the William Inge Center for the Arts in the spring was a great help with that, as was an amazing workshop at TimeLine Theater in December.  But the biggest boon to this project has been my collaboration with Chicago director Kevin Christopher Fox.  It is wonderful to find a director who can work alongside you as a dramaturg as well as be successful in bringing productions of your plays to the stage.
My other new creative venture has brought with it another exciting creative collaboration.  I have been studying to be an opera librettist with American Lyric Theater's Composer Librettist Development Program for the last year and a half, and have found that I absolutely love working with composers and telling stories with music.  I wrote my first opera this year -- a thirty minute gothic chamber opera called "The Resurrection Engine" -- with composer Evan Meier, and we are just beginning the process of writing a second piece together.  I'm very excited to see where this new venture leads me!  I recently watched the movie "Quartet," and in it, an opera singer tried to describe what opera is to a bunch of teenagers.  He told them that in opera, when someone stabs you in the back, instead of bleeding, you sing.  I look forward to letting my characters do more singing in 2015!
I'd like to give a big thank you to all the people I've been lucky enough to work with this year.  I'm a very lucky playwright. I love what I do -- and I get to do what I love. Thanks for being a part of my life and work, friends and colleagues!

"The Gun Show" premiered in Chicago, directed by Kevin Christopher Fox, and went on to a second production in Los Angeles, directed by Darin Anthony (with a third coming up shortly in Trenton, directed by Damon Bonetti and featuring Trent Blanton). 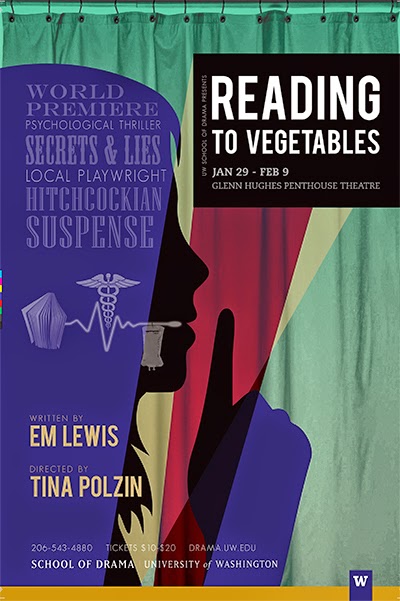 "Reading to Vegetables" premiered at University of Washington, directed by Tina Polzin.  Then the play went on to a second production at Independence College in Kansas, during my residency there, directed by Kevin Christopher Fox.

"Heads" was produced at Pittsburgh Rep, "Infinite Black Suitcase" was produced by Staples Players, and a bunch of my short plays was produced by the DramaDogs.
I taught playwriting and worked on "Magellanica" during a nine-week residency at the William Inge Center for the Arts in the spring, had readings of the play at Moving Arts in Los Angeles and Project Y in NYC, and then had a tremendous ten-day workshop of the play at TimeLine in Chicago -- making fantastic progress on the play with their help.
I was host playwright for the Ashland New Plays Festival in the fall.
Samuel French, my publisher, featured "Infinite Black Suitcase" in their newsletter.
I was a finalist for the Shakespeare's Sister Fellowship from A Room of Her Own Foundation. 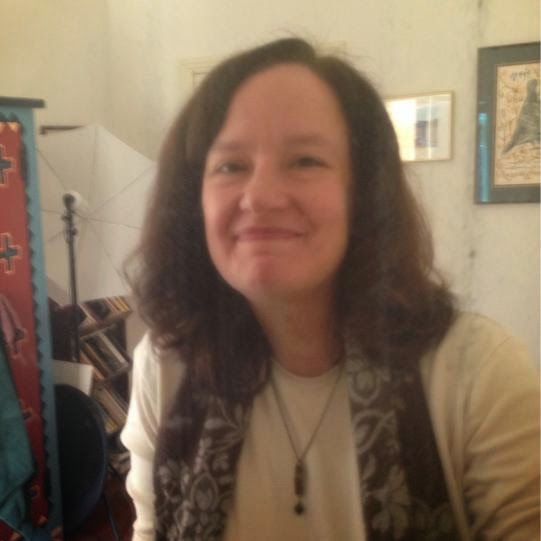 Here in Oregon, I helped my Dad plant the garden in the spring, helped my brother harvest grapes in his vineyard in the fall, and took a wonderful (and much needed!) road trip down the California and Oregon coast in November.  This is such a beautiful state!
Goodbye, 2014!  Hello, 2015!