Last Night, and the Trip Home

The Mysterious Case of the Incident in the Alley.

*Packing.  Cleaning.  Screams in the alley -- which turned out to be someone filming a movie.

*Looking over the apartment with Madame.


The Peruvian Village in my plane.

I'm tired, from the staying up and cleaning, and the rape and pillage in the alley, and madame, and then getting to the airport on time.  Too tired to try to figure out what to do about the Peruvians in my seat.  But luckily, their spokesman comes over and calls up a flight attendant, which results in me getting my seat switched from a middle seat in the back to a window seat in the middle, with an empty seat between me and the other gal (who was also displaced by the Peruvians).  Lucky us, in an otherwise full plane!

I drift off, dreaming about why the Peruvian village is flying from Paris to New Jersey.

Farmer's Market at the Bastille with Eliza and her friend.

The most magnificent desserts in the park.

I visited Monsieur Rodin today.  His garden was full of roses.  I had a lovely time.

Rodin's sculptures -- his bronzes, specifically -- fascinate me.  White marble is lovely, but bronze is visceral.  I guess I like my sculpture the way I like my plays -- a little darker, and messier, and more muscular.
Posted by EM Lewis at 7:37 PM No comments:

One Day in London!

I'm barreling along in a train, through the long, dark night of the Channel Tunnel between France and England, otherwise known as the "Chunnell."

I don't know what possessed me to get such an early ticket.  I'm fairly sure that my aunt and uncle's kind English friends, who are meeting me in the city to tour me about, are wondering the same thing.  Even the cats were confused.  This is the first time I've used the alarm since I've been in Paris.

The flat I'm staying in really does have a prime location.  It was a straight shot on the Metro 3 line yesterday, to Pere Lachaise, and a straight shot today on the 4 line to Gare du Nord, where I caught the Eurostar train.

I do like the Paris Metro system.  The stations are located throughout the city, their signage is clear and easy to understand, indicating every stop as you enter each platform, and a sign tells you when the next train is due.  On the train itself, a little sign blinks off the stops, so you can see exactly where you are and where you're going.  The doors are tricky, though.  You have to push a little lever to open them.  (They close again automatically.)  Also, you have to keep track of your ticket.  You always use it to enter the station platform, but you also, sometimes, need to use it again to escape on the other end, as I did at Gare du Nord.

I'm glad I left myself a good hour to navigate the train station.  The station had great signage, and a manned information booth when I needed it.  But unlike Amtrak, Eurostar does all their ticket checking before you board.  I guess they have to, as you're going through customs!  So there was a check-in line, then a customs line (where I got a second stamp in my little passport!), then a security line, like in the airport.  Before I knew it, though, I was boarding the train.

This is just a day trip to London.  I have to get back tonight to feed the cats.  But I was so very close... this seemed like a wonderful opportunity to visit the other city at the top of my must-see list!

All I know about England is from history lessons and books and plays and movies and television.  Charles Dickens (reading "Great Expectations" my junior year of high school).  Agatha Christie.  Sherlock Holmes.  Dick Francis (whose mysteries, set in the English racing world, I'm very fond of).  "Torchwood."  "Sherlock."  "Are You Being Served?"  James Herriott!  "The Queen."  William Shakespeare, of course.  Oscar Wilde.  "The Lion in Winter."  "Harry Potter!"  CS Lewis.  JRR Tolkien, for heavens sake.  "Pride and Prejudice."  "The King's Speech."
I imagine that the real thing will have less murder and mayhem, but... you never know!  The train is pulling up to St. Pancras Station now.  So we soon shall see! 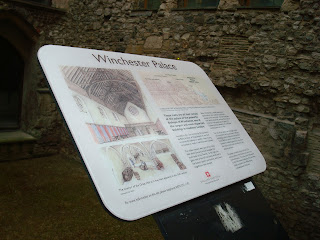 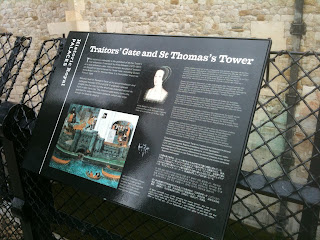