I have written a robot play.
"Where in the world did that come from, Ellen?" you might ask.  And it's true that I usually play in a sandbox that looks more like Lanford Wilson Land than Isaac Asimov Country.  But I like stretching myself.  I like trying new things.  Short plays are great for attempting bold maneuvers in your writing!  They're short!  Surely we can be brave in ten or twenty pages, can't we?
I read quite a lot of science fiction while I was growing up.  I think most geeky smart kids do.  Ray Bradbury, Robert Heinlein, Isaac Asimov, Frank Herbert.  Madeleine L'Engle's Time Trilogy.  And I remember watching reruns of "Star Trek" (the real Star Trek, the original Star Trek) with my dad on television, and staying up and terrifying myself when I was babysitting with late-night viewings of "The Twilight Zone" and "Outer Limits."  I remember my Speech & Debate Team pals Mark and Jeff reciting great chunks of dialogue from Douglas Adams' "A Hitchhiker's Guide to the Galaxy."  "War of the Worlds" and the three "Star Wars" movies and "Bladerunner" all affected how I saw the universe.  Later, I'd find my way into the worlds of Ursula K. LeGuin and Octavia Butler and Margaret Atwood and George Orwell and Dan Simmons.  I liked it there.  These writers were asking big questions.
I like it when writers ask big questions.
So when Gus Schulenberg from Flux Theater Ensemble asked if I could write a short play for them that riffed upon the futuristic/sci-fi themes of their new mainstage show "Deinde," I said yes.
I've written for Flux's "ForePlay" series before.  Last year, Gus asked if I'd write something to go alongside their production of "Ajax in Iraq" by Ellen McLaughlin for their "New World Iliads."  I came up with a futuristic play called "The War Museum."  It was a great challenge, and really, really fun.
I love the idea of this series.  Basically, in the weeks leading up to the opening of a show, they ask a bunch of writers they've worked with before or know to write new short plays that riff upon the themes of their mainstage show.  Each week, a new batch of four or five are assigned to a director, cast, and put up in an evening of readings and fun and cameraderie.  It multiplies exponentially the number of theater artists they get to work with, while speaking directly to the themes of the mainstage play and reaching out to new audiences.  Brilliant!  Lots of work for them, but really, really smart.
My play for ForePlay: Human 2.0 is called "I, Human."  As you might guess from the title, if you're familiar with the writings of Isaac Asimov, it's a bit of an homage to his influential "I, Robot" series -- which introduced the Three Laws of Robotics to the world.  It's got robots and scientists, heated discussions about ethics, and a bit of the old ultra-violence, too.  If you're in New York City on Monday night, I hope you'll come check it out.  I'd love to see you there!
Flux Theater Ensemble's ForePlay: Human 2.0
Monday, April 2 at 8pm
The Lounge at Dixon Place
161A Chrystie Street (between Rivington and Delancey)
New York, NY
For more information:  Flux's ForePlay: Human 2.0
Playwrights: David Ian Lee (TIME), EM Lewis (RESPONSIBILITY), David Stallings (BORDERS), Lauren Ferebee (MUSIC), Nat Cassidy (PARENTING)
Director: Matt Archambault
Actors: Becky Kelly, Maria Portman Kelly, Kari Swenson Riely, Chris Wight, Tatiana Gomberg, John Albano
Posted by EM Lewis at 3:40 PM 2 comments: 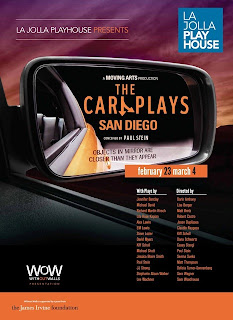 Here are some pictures from Moving Arts production of The Car Plays, now running (extended!) in San Diego, at La Jolla Playhouse.  I'm proud to have my short play "Reveille" included.  "Reveille" is about a young man who has signed up for the military on the morning he is supposed to leave for Basic Training, and his father, who despite being a vet himself, doesn't want his son to go. 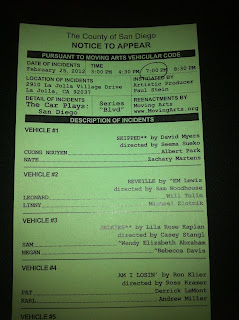