I am absolutely delighted to announce that my epic play "Magellanica" will have its world premiere at Artists Repertory Theater in Portland, Oregon in January/February 2018.

In 1986, scientists and engineers from around the world converge at the South Pole Research Station to figure out, among other things, if there really is a hole in the sky. In the darkest, coldest, most dangerous place on Earth, eight imperfect souls are trapped together. Utterly isolated from the outside world for eight and a half months, this research team must face life or death challenges, their own inner demons and depend upon each other for survival.

With epic scope in the tradition of The Kentucky Cycle or Angels in America, this play takes its inspiration from the true story of the discovery of the hole in the ozone layer at the height of the Cold War. Part historical adventure, part love story and mystical foray into the unknown, Lewis has constructed a demanding, five-part epic that tackles issues of political, social and scientific urgency on a global scale. As Lewis says, "It has scientists as heroes. It's about the importance of truth. It's about a world that can either tear apart or come together for its own survival." 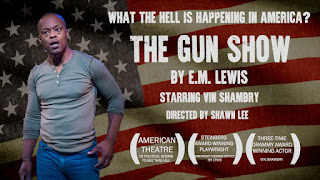 It's been such a busy year, my friends, that I've not even had a chance to breathe, much less blog.  But this latest news can't go without an update.

I'm taking the Portland production of THE GUN SHOW to the Edinburgh Fringe Festival in August 2017!  The play was directed by Shawn Lee, assistant directed by Nate Cohen, and features the fantastic Vin Shambry.

We are going with the support of Coho Theater, which supported the fall production of the play and is sticking with us!  We received a wonderful grant from the Oregon Arts Commission and another from the Regional Arts Council Commission, as well as major donations from Ronni Lacroute and Harold Weinstein.  Artists Repertory Theater allowed us to do a major fundraising event in the Morrison on July 1, where we played to a full and supportive house.

I am so excited to be part of this year's fringe festival!  I've heard so much about Edinburgh over the years.  And this is the most wonderful group of theater-makers.

If you or a friend find yourself in Edinburgh in August, come on down to The Space UK and see the show!  And say hello!

Details about THE GUN SHOW at the Edinburgh Fringe Festival can be found HERE!

Lots of fun projects coming up in March!

APPLE SEASON
Next up: A staged reading of "Apple Season" in the Women's Playwrights Initiative at Ivoryton Playhouse in Connecticut! If you're in Connecticut, come on out and see us!  There will be readings and talkbacks and refreshments... It's going to be grand. Looking forward to exploring this play with my director and actors.  Click here for more info!

THE GUN SHOW
Immediately after the festival in Connecticut, I'm going to jump on a train and head down to Richmond, Virginia to participate in another festival!  On Saturday, March 11th, Cadence Theatre Company and TheatreLAB will present two shows for the first “Empathy in Action: a Social Justice Theatre Project,” a project of Cadence Theatre Company’s Sitelines program to be held at Maggie Walker Governor's School from 3pm-6:30pm.  A student panel will facilitate a discussion after each show.  Admission is free and open to the public, (first come, first seated).  I get to work with two fantastic theater artists on this: director Laine Satterfeld and actor Bostin Christopher. If you're in Richmond, please join us for an afternoon of theater, conversation, and community. Click here for more info!

SHERLOCK HOLMES AND THE CASE OF THE FALLEN GIANT (OPERA)
And the third fabulous and exciting thing that I'll be working on in March is the opera!! A week-long workshop of the family-friendly opera that composer Evan Meier and I have been working on with American Lyric Theater will culminate in a public performance at Merkin Concert Hall in New York City. Click the link for tickets! We hope you'll join us.

A mash-up honoring the classic detective stories of Sherlock Holmes in a romp through a fairy tale world to solve a mystery unlike any Holmes and Watson have encountered before. With a playful libretto by E.M Lewis and mysterious score by Evan Meier, the game’s afoot!