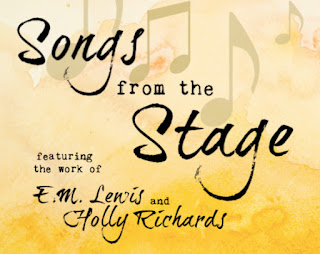 On Friday, February 7th, join me and lyricist Holly Richards for Songs from the Stage!  Holly and I are both members of LineStorm Playwrights.  She writes musicals and I write opera!  So when the opportunity came for us to share some of our work in the Portland-wide Fertile Ground Festival, we decided to get together.  This will be a fun hour-long concert (give or take) with songs and numbers from several of our works.  Hope to see you there!

From modern musical theatre to opera, join us for the musical works of E.M. Lewis and Holly Richards. Featuring songs from established works and works-in-progress, these two writers will share insights into their creative processes, as well as background on their inspirations.

This reading of Songs from the Stage is funded in part by the Regional Arts & Culture Council. ASL interpretation will be provided.
Posted by EM Lewis at 8:43 PM